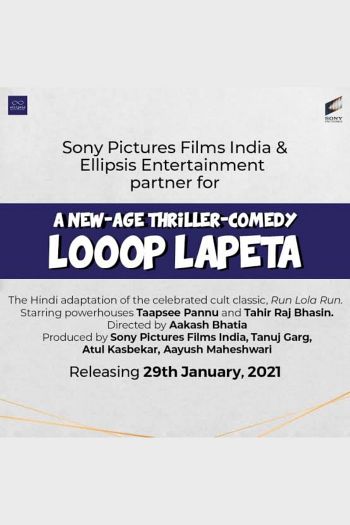 Synopsis:
When her boyfriend loses a mobster’s cash, Savi races against the clock to save the day if only she can break out of a curious cycle of dead ends. Looop Lapeta (2022) is directed by Aakash Bhatia and was released on February 4th, 2022.

When is Looop Lapeta coming to DVD?

Looop Lapeta DVD release date is set for May 16, 2022, with Blu-ray available the same day as the DVD release. DVD releases are typically released around 12-16 weeks after the theatrical premiere.

When will Looop Lapeta be released digitally?

Looop Lapeta digital release from Amazon Video and iTunes should be available 1-2 weeks before the Blu-ray, DVD, and 4K releases. The estimated VOD release date is May 2022.

Looop Lapeta is rated TV-MA. This program is specifically designed to be viewed by adults and therefore may be unsuitable for children under 17. This program may contain one or more of the following: crude indecent language (L), explicit sexual activity (S), or graphic violence (V).

The movie currently has a 5.1 out of 10 IMDb rating. We will continue to add and update the reviews and scores. Here is where you can stream and purchase the Looop Lapeta ⤵