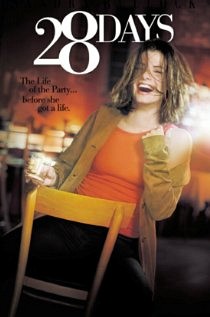 DVD: 28 Days DVD release date is set for September 19, 2000. Dates do change so check back often as the release approaches.

Blu-ray: 28 Days Blu-ray will be available the same day as the DVD. Blu-ray and DVD releases are typically released around 12-16 weeks after the theatrical premiere.

Digital: 28 Days digital release from Amazon Video and iTunes will be available 1-2 weeks before the Blu-ray, DVD, and 4K releases. The estimate release date is September 2000. We will update this page with more details as they become available. The movie has been out for around since its theatrical release.

When Gwen Cummings is involved in a terrible car accident due to her driving while intoxicated on her sisters wedding day, she is faced with two options, neither of which are pleasant. She must either agree to partake in the rehabilitation that is offered to her, or spend time in prison. Although she does inevitably choose rehab over prison, she dislikes and rejects most of the programs offered to treat her, as she believes she does not have an addiction. However, Gwen becomes friends with many of the other people within the rehabilitation center and realizes that she does have a problem. Although she know that she does not walk an easy path, she realizes that her only choice is to pursue it in hopes of breaking her addiction.

28 Days DVD/Blu-ray is rated PG-13. Parents are urged to be cautious. Some material may be inappropriate for pre-teenagers (under 13).

The movie currently has a 5.8 out of 10 IMDb rating and 46 Metascore on Metacritic. We will continue to add and update review scores.