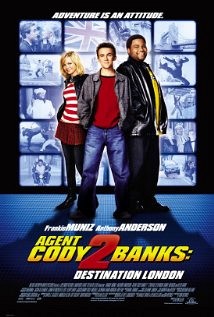 Blu-ray: Agent Cody Banks 2: Destination London Blu-ray will be available the same day as the DVD. Blu-ray and DVD releases are typically released around 12-16 weeks after the theatrical premiere.

Digital: Agent Cody Banks 2: Destination London digital release from Amazon Video and iTunes will be available 1-2 weeks before the Blu-ray, DVD, and 4K releases. The estimate release date is July 2004. We will update this page with more details as they become available. The movie has been out for around since its theatrical release.

A full year after his first adventure, Agent Cody Banks is sent to find a former instructor who has a mind-control microchip and isn’t using it like he should be. Cody has to pretend to be a musical prodigy so that he can get close to a London-based scientist who can make the microchip work. While he’s on his way to correcting these issues and getting the microchip back into the proper hands, he meets up with a demoted agent who starts to work with him. Without Cody’s help, the evil scientist plans to turn all of the current world leaders into zombies so that he can take over the world; however, Cody has the gadgets and things he needs to start off on his mission.

The movie currently has a 4.1 out of 10 IMDb rating and 32 Metascore on Metacritic. We will continue to add and update review scores.