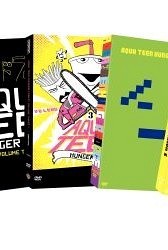 DVD: Aqua Teen Hunger Force DVD release date is set for June 1, 2010. Dates do change so check back often as the release approaches.

Blu-ray: Aqua Teen Hunger Force Blu-ray will be available the same day as the DVD. Blu-ray and DVD releases are typically released around 12-16 weeks after the theatrical premiere.

Digital: Aqua Teen Hunger Force digital release from Amazon Video and iTunes will be available 1-2 weeks before the Blu-ray, DVD, and 4K releases. The estimate release date is May 2010. We will update this page with more details as they become available. The movie has been out for around since its theatrical release.

Aqua Teen Hunger Force stars Dave WillisDana SnyderCarey Means. View everything you need to know about the movie below.

Frylock, a carton of fries, Shake, a milkshake, and Meatwad, a meatball, are detectives living in a Jersey neighborhood. Shake is usually the instigator of assorted plots that make life difficult at every turn for the group. Then Frylock usually finds a way to get out of the mess that Shake got them into. They also have a tendency to make life interesting and difficult for Carl, the retired single man who lives next door.

Aqua Teen Hunger Force DVD/Blu-ray is rated TV-MA. This program is specifically designed to be viewed by adults and therefore may be unsuitable for children under 17. This program may contain one or more of the following: crude indecent language (L), explicit sexual activity (S), or graphic violence (V).