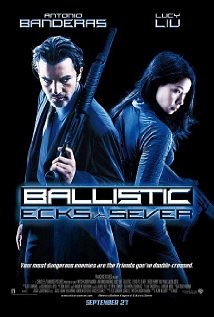 DVD: Ballistic: Ecks vs. Sever DVD release date is set for December 24, 2002. Dates do change so check back often as the release approaches.

Blu-ray: Ballistic: Ecks vs. Sever Blu-ray will be available the same day as the DVD. Blu-ray and DVD releases are typically released around 12-16 weeks after the theatrical premiere.

Digital: Ballistic: Ecks vs. Sever digital release from Amazon Video and iTunes will be available 1-2 weeks before the Blu-ray, DVD, and 4K releases. The estimate release date is December 2002. We will update this page with more details as they become available. The movie has been out for around since its theatrical release.

Sever, a former agent for the Defense Intelligence Agency, has gone rogue and kidnapped the son of DIA director Robert Gant. Jeremiah Ecks, a former FBI agent, is sent to investigate the kidnapping. He gradually uncovers a complicated plot to steal a small robotic device intended to assassinate from inside the body. The pasts of Ecks, Sever and Gant are all intertwined and Michael, Gant’s kidnapped son, is caught in the middle. As Ecks unravels the plot even more he discovers Sever’s real motivation behind the kidnapping. The revelation ultimately causes Ecks to reexamine his own intentions.

Ballistic: Ecks vs. Sever DVD/Blu-ray is rated R. R stands for ‘Restricted’, which means children under 17 require accompanying parent or adult guardian. The movie contains some adult material and parents are urged to learn more about the movie.

The movie currently has a 3.5 out of 10 IMDb rating and 19 Metascore on Metacritic. We will continue to add and update review scores.