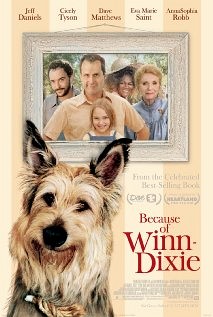 DVD: Because of Winn-Dixie DVD release date is set for August 9, 2005. Dates do change so check back often as the release approaches.

Blu-ray: Because of Winn-Dixie Blu-ray will be available the same day as the DVD. Blu-ray and DVD releases are typically released around 12-16 weeks after the theatrical premiere.

Digital: Because of Winn-Dixie digital release from Amazon Video and iTunes will be available 1-2 weeks before the Blu-ray, DVD, and 4K releases. The estimate release date is July 2005. We will update this page with more details as they become available. The movie has been out for around since its theatrical release.

Because of Winn-Dixie stars AnnaSophia Robb, Jeff Daniels, Cicely Tyson, Dave Matthews, Eva Marie Saint. View everything you need to know about the movie below.

India Opal Buloni, just ten years old, has moved to a small town in Florida with her preacher father. Her loneliness is helped when she meets up with a scruffy mutt at the local grocery store. She names him Winn-Dixie and he follows her everywhere. Winn-Dixie is good at befriending people, and Opal begins to gain new friends. The town librarian tells her stories. Miss Gloria, a strange blind woman, teaches her that life is filled with mistakes but still beautiful. Shy Otis, who runs the pet store, has a wonderful gift for music. Her new community helps Opal come to terms with her mothers absence. They also play a role in helping to locate Winn-Dixie when he runs away in a thunderstorm.

The movie currently has a 6.1 out of 10 IMDb rating and 54 Metascore on Metacritic. We will continue to add and update review scores.