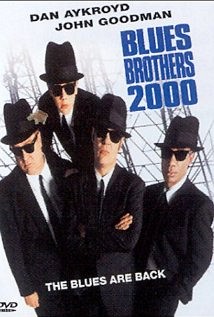 DVD: Blues Brothers 2000 DVD release date is set for October 24, 2006. Dates do change so check back often as the release approaches.

Blu-ray: Blues Brothers 2000 Blu-ray will be available the same day as the DVD. Blu-ray and DVD releases are typically released around 12-16 weeks after the theatrical premiere.

Digital: Blues Brothers 2000 digital release from Amazon Video and iTunes will be available 1-2 weeks before the Blu-ray, DVD, and 4K releases. The estimate release date is October 2006. We will update this page with more details as they become available. The movie has been out for around since its theatrical release.

Elwood Blues has been in prison for years. Upon release he finds out his beloved brother, Jake Blues, and their father figure, Curtis, have both passed on. To make matters worse, the orphanage has been closed and demolished. Elwood discovers Curtis has a son named Cab, a police commander, who has no knowledge of him or the Blues Brothers. This doesn’t stop Elwood from asking for money to buy a car. Elwood is rejected by Cab, but orphan, Buster, steals the money from Cab’s wallet and gives it to Elwood. Elwood reassembles the band and hits the road again. The band does gigs while running from the Russian mob, white supremacists and the police. Things get weirder when they are turned into zombies.

The movie currently has a 4.5 out of 10 IMDb rating and N/A Metascore on Metacritic. We will continue to add and update review scores.