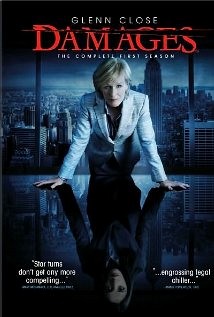 DVD: Damages DVD release date is set for July 16, 2013. Dates do change so check back often as the release approaches.

Blu-ray: Damages Blu-ray will be available the same day as the DVD. Blu-ray and DVD releases are typically released around 12-16 weeks after the theatrical premiere.

Digital: Damages digital release from Amazon Video and iTunes will be available 1-2 weeks before the Blu-ray, DVD, and 4K releases. The estimate release date is July 2013. We will update this page with more details as they become available. The movie has been out for around since its theatrical release.

Damages stars Glenn CloseRose ByrneTate Donovan. View everything you need to know about the movie below.

A show that sits firmly in the “legal thriller” genre, “Damages” is the story of recent law school graduate Ellen Parsons, and her apprenticeship at the law firm of the experienced, renowned, and ruthless attorney Patty Hewes. Each season revolves around one major case that Hewe’s firm takes on, as well as taking a look at the conflicted relationship that develops between Hewes and Parsons. While Parsons is thrilled to be a part of such a well known and prestigious firm, her personal and legal ethics are frequently in conflict with Hewes, which puts both in perilous positions at times. The series is notable for its in-depth examination of challenging law cases from both perspectives – that of the firm, and of the defendants.

Damages DVD/Blu-ray is rated TV-MA. This program is specifically designed to be viewed by adults and therefore may be unsuitable for children under 17. This program may contain one or more of the following: crude indecent language (L), explicit sexual activity (S), or graphic violence (V).