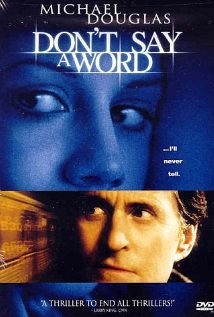 DVD: Don’t Say a Word DVD release date is set for February 19, 2002. Dates do change so check back often as the release approaches.

Blu-ray: Don’t Say a Word Blu-ray will be available the same day as the DVD. Blu-ray and DVD releases are typically released around 12-16 weeks after the theatrical premiere.

Digital: Don’t Say a Word digital release from Amazon Video and iTunes will be available 1-2 weeks before the Blu-ray, DVD, and 4K releases. The estimate release date is February 2002. We will update this page with more details as they become available. The movie has been out for around since its theatrical release.

In 1991, a successful plot to steal a rare gem leaves Patrick, the leader of the thieves, double crossed, empty handed and vengeful. Ten years later Dr. Nathan R. Conrad, an unwitting and prominent child psychiatrist, is invited to examine Elisabeth, a disturbed young resident of the state sanatorium on the day before Thanksgiving. hat evening Patrick, recently released from prison, breaks into Nathans home and kidnaps his intelligent daughter as a hostage. Patrick uses his hostage to get at Nathans patient Elisabeth, coercing the psychologist to try to get the 6-digit code that will lead to the gem out of his disturbed patient.

Don’t Say a Word DVD/Blu-ray is rated R. R stands for ‘Restricted’, which means children under 17 require accompanying parent or adult guardian. The movie contains some adult material and parents are urged to learn more about the movie.

The movie currently has a 6.1 out of 10 IMDb rating and 38 Metascore on Metacritic. We will continue to add and update review scores.