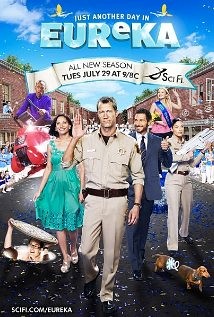 DVD: Eureka DVD release date is set for February 23, 2016. Dates do change so check back often as the release approaches.

Blu-ray: Eureka Blu-ray will be available the same day as the DVD. Blu-ray and DVD releases are typically released around 12-16 weeks after the theatrical premiere.

Digital: Eureka digital release from Amazon Video and iTunes will be available 1-2 weeks before the Blu-ray, DVD, and 4K releases. The estimate release date is February 2016. We will update this page with more details as they become available. The movie has been out for around since its theatrical release.

Eureka stars Colin FergusonSalli Richardson-WhitfieldErica Cerra. View everything you need to know about the movie below.

Eureka is a community located deep in the heart of Oregon. It’s run by a company called Global Dynamics. The town is filled with employees and scientists that work for GD. In the town filled with the most brilliant minds in the world, many things can go wrong. Deputy U. S. Marshal Carter gets into a car accident outside of Eureka and has to walk into town with his young prisoner; his runaway daughter, Zoe. He quickly finds himself involved in the town’s quirkiest experiments. The current sheriff is incapacitated so he has to fill the sheriff’s shoes temporarily. Although, he doesn’t have a genius level IQ, he uses his observation skills and common sense to solve some of the town’s unique problems.

Eureka DVD/Blu-ray is rated TV-14. This program contains some material that many parents would find unsuitable for children under 14 years of age. Parents are strongly urged to exercise greater care in monitoring this program and are cautioned against letting children under the age of 14 watch unattended. This program may contain one or more of the following: intensely suggestive dialogue (D), strong coarse language (L), intense sexual situations (S), or intense violence (V).