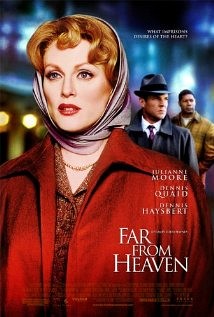 DVD: Far from Heaven DVD release date is set for August 24, 2004. Dates do change so check back often as the release approaches.

Blu-ray: Far from Heaven Blu-ray will be available the same day as the DVD. Blu-ray and DVD releases are typically released around 12-16 weeks after the theatrical premiere.

Digital: Far from Heaven digital release from Amazon Video and iTunes will be available 1-2 weeks before the Blu-ray, DVD, and 4K releases. The estimate release date is August 2004. We will update this page with more details as they become available. The movie has been out for around since its theatrical release.

Frank and Kathy Whittaker appear to be the standard for success in the 1950s. They live the stereotypical middle class life, but all is not what it seems. When Kathy witnesses Frank making love to a man at his office, she goes searching for love elsewhere. She finds attention and affection in the arms of her African-American gardener, Raymond. Kathy must deal with the crisis of Frank trying to curb his homosexuality tendencies as well as the social stigma of being seen in public with a black man. As Frank and Kathy’s relationship crumbles, they both realize that their new lives are destined to be apart from one another. They sacrifice the remainder of their marriage and pursue their own relationships, shattering the illusion of happiness that their marriage originally presented to the world.

Far from Heaven DVD/Blu-ray is rated TV-14. This program contains some material that many parents would find unsuitable for children under 14 years of age. Parents are strongly urged to exercise greater care in monitoring this program and are cautioned against letting children under the age of 14 watch unattended. This program may contain one or more of the following: intensely suggestive dialogue (D), strong coarse language (L), intense sexual situations (S), or intense violence (V).

The movie currently has a 7.4 out of 10 IMDb rating and 84 Metascore on Metacritic. We will continue to add and update review scores.