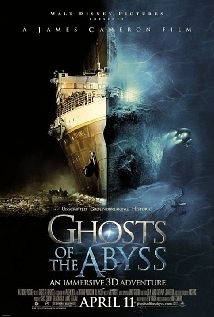 DVD: Ghosts of the Abyss DVD release date is set for April 27, 2004. Dates do change so check back often as the release approaches.

Blu-ray: Ghosts of the Abyss Blu-ray will be available the same day as the DVD. Blu-ray and DVD releases are typically released around 12-16 weeks after the theatrical premiere.

Digital: Ghosts of the Abyss digital release from Amazon Video and iTunes will be available 1-2 weeks before the Blu-ray, DVD, and 4K releases. The estimate release date is April 2004. We will update this page with more details as they become available. The movie has been out for around since its theatrical release.

Ghosts of the Abyss stars Bill Paxton, John Broadwater, Lori Johnston, Charles Pellegrino, Don Lynch. View everything you need to know about the movie below.

Aboard Russian research ship Akademik Mstislav, Director James Cameron returns to explore the wreckage of the Titanic. Together with experts in history and marine exploration, Cameron goes on an adventure to learn more about one of the greatest maritime tragedies in history. With new technology, Cameron documents the undersea hulk in never-before seen detail. Witness sights no man has viewed in 89 years and learn why the public is so intrigued by the story. The 9/11 attacks occur while they are diving, and Cameron films an introspective comparison of the tragedies.

Ghosts of the Abyss DVD/Blu-ray is rated G. G rating means all ages are admitted. The material will not offend parents for viewing by children.

The movie currently has a 6.8 out of 10 IMDb rating and 67 Metascore on Metacritic. We will continue to add and update review scores.