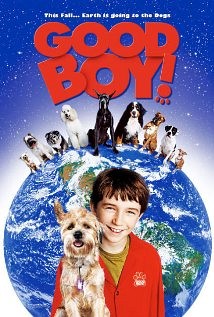 DVD: Good Boy! DVD release date is set for March 2, 2004. Dates do change so check back often as the release approaches.

Blu-ray: Good Boy! Blu-ray will be available the same day as the DVD. Blu-ray and DVD releases are typically released around 12-16 weeks after the theatrical premiere.

Digital: Good Boy! digital release from Amazon Video and iTunes will be available 1-2 weeks before the Blu-ray, DVD, and 4K releases. The estimate release date is February 2004. We will update this page with more details as they become available. The movie has been out for around since its theatrical release.

The film explores the notion that dogs are intelligent beings who arrived on Earth from outer space thousands of years ago to spy on humans. However, instead of reporting back to their home planet to aid in the preparation of a planetary invasion, the dogs remained, prompting Canid 3942 to come to Earth to investigate. Canid enlists the help of a boy who owns a dog walking service. The two must get the dogs in shape for an upcoming inspection. If the dogs fail the inspection, they must return to their home planet.

The movie currently has a 4.9 out of 10 IMDb rating and 49 Metascore on Metacritic. We will continue to add and update review scores.