DVD Release Dates Uncategorized It Runs in the Family 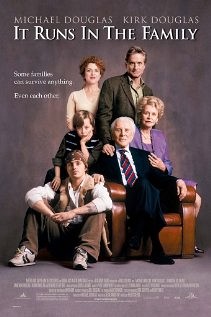 DVD: It Runs in the Family DVD release date is set for October 21, 2003. Dates do change so check back often as the release approaches.

Blu-ray: It Runs in the Family Blu-ray will be available the same day as the DVD. Blu-ray and DVD releases are typically released around 12-16 weeks after the theatrical premiere.

Digital: It Runs in the Family digital release from Amazon Video and iTunes will be available 1-2 weeks before the Blu-ray, DVD, and 4K releases. The estimate release date is October 2003. We will update this page with more details as they become available. The movie has been out for around since its theatrical release.

It Runs in the Family stars Michael Douglas, Kirk Douglas, Rory Culkin, Cameron Douglas, Diana Douglas. View everything you need to know about the movie below.

The three generations of the Gromberg family may be wealthy, but they have more than their fair share of dysfunction. Alex Gromberg feels that no matter how successful he is it is not enough for his father, Mitchell. In response to that he finds himself permissive with his own son, Asher, and wonders if he is too permissive for his son’s own good. When Alex becomes involved in a drug bust at college, Alex must find a way to balance his need to not be like his father and helping Asher grow up and take responsibility for his own actions.

It Runs in the Family DVD/Blu-ray is rated PG-13. Parents are urged to be cautious. Some material may be inappropriate for pre-teenagers (under 13).

The movie currently has a 5.5 out of 10 IMDb rating and 44 Metascore on Metacritic. We will continue to add and update review scores.