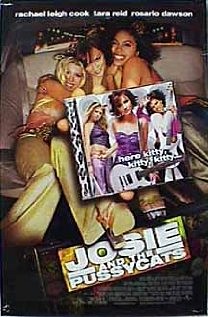 DVD: Josie and the Pussycats DVD release date is set for February 1, 2005. Dates do change so check back often as the release approaches.

Blu-ray: Josie and the Pussycats Blu-ray will be available the same day as the DVD. Blu-ray and DVD releases are typically released around 12-16 weeks after the theatrical premiere.

Digital: Josie and the Pussycats digital release from Amazon Video and iTunes will be available 1-2 weeks before the Blu-ray, DVD, and 4K releases. The estimate release date is January 2005. We will update this page with more details as they become available. The movie has been out for around since its theatrical release.

Josie and the Pussycats stars Rachael Leigh Cook, Rosario Dawson, Tara Reid, Gabriel Mann, Paulo Costanzo. View everything you need to know about the movie below.

Female pop-rock group The Pussycats get signed by a major record company after being discovered while playing a small gig in their hometown. The sweet and glamorous lifestyle that awaits them quickly turns sour as the trio discover that they’re being used to propagate subliminal messages to the throngs of teenagers buying their albums. The record producers take notice of the band member’s increasing suspicions and decide that they are expendable. The girls must stay sharp if they are to survive the cut-throat business.

Josie and the Pussycats DVD/Blu-ray is rated PG-13. Parents are urged to be cautious. Some material may be inappropriate for pre-teenagers (under 13).

The movie currently has a 5.1 out of 10 IMDb rating and 47 Metascore on Metacritic. We will continue to add and update review scores.