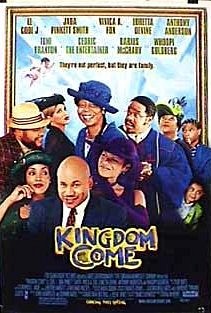 DVD: Kingdom Come DVD release date is set for September 25, 2001. Dates do change so check back often as the release approaches.

Blu-ray: Kingdom Come Blu-ray will be available the same day as the DVD. Blu-ray and DVD releases are typically released around 12-16 weeks after the theatrical premiere.

Digital: Kingdom Come digital release from Amazon Video and iTunes will be available 1-2 weeks before the Blu-ray, DVD, and 4K releases. The estimate release date is September 2001. We will update this page with more details as they become available. The movie has been out for around since its theatrical release.

When an ornery and disliked man, Bud Slocumb suddenly keels over and dies his extended family all descend on the small town of Lula. The family has more than its fair share of dysfunction including Slocumb’s unemployed adulterous son Junior, his alcoholic son Ray, and bible thumping Aunt Marguerite, among others. The motley group of relatives must all find something nice to say about the man they all hated and they must also find a way to finally get along with one another.

The movie currently has a 5.3 out of 10 IMDb rating and 48 Metascore on Metacritic. We will continue to add and update review scores.