DVD Release Dates Uncategorized Life or Something Like It 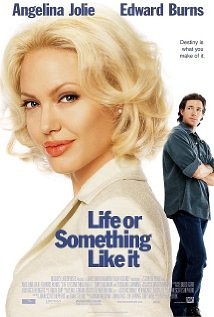 DVD: Life or Something Like It DVD release date is set for October 15, 2002. Dates do change so check back often as the release approaches.

Blu-ray: Life or Something Like It Blu-ray will be available the same day as the DVD. Blu-ray and DVD releases are typically released around 12-16 weeks after the theatrical premiere.

Digital: Life or Something Like It digital release from Amazon Video and iTunes will be available 1-2 weeks before the Blu-ray, DVD, and 4K releases. The estimate release date is October 2002. We will update this page with more details as they become available. The movie has been out for around since its theatrical release.

Life or Something Like It stars Angelina Jolie, Edward Burns, Tony Shalhoub, Christian Kane, James Gammon. View everything you need to know about the movie below.

Ambitious reporter Lanie Kerrigan believes that she is going places. She is dating a sports star and dreams of moving on to a cushy network job. Lanie’s plans are derailed when she interviews a man who claims to be clairvoyant, and he predicts that she will die in seven days. When his other predictions come true, Lanie begins to believe that he really does have the power of foresight. With the help of her combative cameraman Pete, Lanie tries to make the most of her remaining seven days.

Life or Something Like It DVD/Blu-ray is rated PG-13. Parents are urged to be cautious. Some material may be inappropriate for pre-teenagers (under 13).

The movie currently has a 5.7 out of 10 IMDb rating and 31 Metascore on Metacritic. We will continue to add and update review scores.