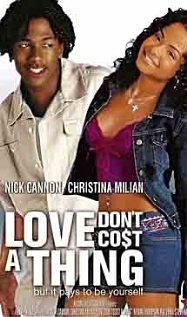 DVD: Love Don’t Cost a Thing DVD release date is set for April 27, 2004. Dates do change so check back often as the release approaches.

Blu-ray: Love Don’t Cost a Thing Blu-ray will be available the same day as the DVD. Blu-ray and DVD releases are typically released around 12-16 weeks after the theatrical premiere.

Digital: Love Don’t Cost a Thing digital release from Amazon Video and iTunes will be available 1-2 weeks before the Blu-ray, DVD, and 4K releases. The estimate release date is April 2004. We will update this page with more details as they become available. The movie has been out for around since its theatrical release.

Alvin Johnson is at the bottom of the high school hierarchy. He is considered nerdy and socially awkward by his peers. He also works as a pool cleaner which makes him more of the help than the country club attendee that so many of his peers happen to be. One day, he gets the idea to hire the popular cheerleader Paris Morgan to pretend to be his girlfriend in hopes of raising his social status. She is reluctant at first, but soon decides that she could use to money.

Love Don’t Cost a Thing DVD/Blu-ray is rated PG-13. Parents are urged to be cautious. Some material may be inappropriate for pre-teenagers (under 13).

The movie currently has a 4.6 out of 10 IMDb rating and 37 Metascore on Metacritic. We will continue to add and update review scores.