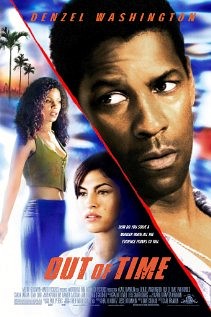 DVD: Out of Time DVD release date is set for January 6, 2004. Dates do change so check back often as the release approaches.

Blu-ray: Out of Time Blu-ray will be available the same day as the DVD. Blu-ray and DVD releases are typically released around 12-16 weeks after the theatrical premiere.

Digital: Out of Time digital release from Amazon Video and iTunes will be available 1-2 weeks before the Blu-ray, DVD, and 4K releases. The estimate release date is December 2003. We will update this page with more details as they become available. The movie has been out for around since its theatrical release.

Out of Time stars Denzel Washington, Eva Mendes, Sanaa Lathan, Dean Cain, John Billingsley. View everything you need to know about the movie below.

Matt Lee Whitlock is the well-respected police chief in the small town of Banyan Key, Florida. In the middle of a divorce, he decides to take some money from the police safe at work, which was captured from some local drug runners. He gives this money to his married mistress to help pay for cancer treatment. Soon his life begins to unravel, however, when his mistress and her husband are killed in a double homicide. He immediately realizes that if he doesnt stay a few steps ahead of his own police force, he will fall under suspicion. Matt now must race to solve the murder before he runs out of time and ends up in jail himself.

Out of Time DVD/Blu-ray is rated R. R stands for ‘Restricted’, which means children under 17 require accompanying parent or adult guardian. The movie contains some adult material and parents are urged to learn more about the movie.

The movie currently has a 6.5 out of 10 IMDb rating and 63 Metascore on Metacritic. We will continue to add and update review scores.