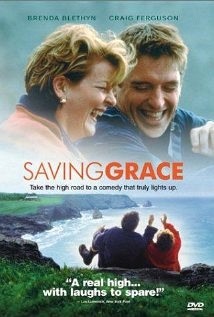 DVD: Saving Grace DVD release date is set for December 19, 2000. Dates do change so check back often as the release approaches.

Blu-ray: Saving Grace Blu-ray will be available the same day as the DVD. Blu-ray and DVD releases are typically released around 12-16 weeks after the theatrical premiere.

Digital: Saving Grace digital release from Amazon Video and iTunes will be available 1-2 weeks before the Blu-ray, DVD, and 4K releases. The estimate release date is December 2000. We will update this page with more details as they become available. The movie has been out for around since its theatrical release.

Grace Trevethyn is a widow who is shattered by the sudden suicide of her husband. Not only is she devastated to lose him, but her own livelihood is in danger, since without her husband to bring in money, she faces foreclosure on her home. However, she finds a ray of hope in her gardener, who has a tiny operation growing marijuana plants. Grace decides that she will help him and her both by taking the plans to London and trying to sell them to a notorious drug dealer. Everyone in their tiny town knows about the secret marijuana operation, but no one is interested in turning them in; they just want things to work out for the best. However, there are many complications lying ahead.

Saving Grace DVD/Blu-ray is rated R. R stands for ‘Restricted’, which means children under 17 require accompanying parent or adult guardian. The movie contains some adult material and parents are urged to learn more about the movie.

The movie currently has a 6.8 out of 10 IMDb rating and 62 Metascore on Metacritic. We will continue to add and update review scores.