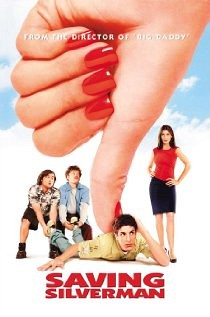 DVD: Saving Silverman DVD release date is set for July 17, 2001. Dates do change so check back often as the release approaches.

Blu-ray: Saving Silverman Blu-ray will be available the same day as the DVD. Blu-ray and DVD releases are typically released around 12-16 weeks after the theatrical premiere.

Digital: Saving Silverman digital release from Amazon Video and iTunes will be available 1-2 weeks before the Blu-ray, DVD, and 4K releases. The estimate release date is July 2001. We will update this page with more details as they become available. The movie has been out for around since its theatrical release.

Darren, Wayne, and J.D. have been best friends since childhood. The three are Neil Diamond fanatics and play in a cover band together. One night after a band gig, Darren meets Judith, who he quickly falls in love with. Wayne and J.D. are happy for their friend, but after weeks of dating, they begin to realize how domineering and controlling Judith really is. When she forces Darren to dump his friends and quit the band, they decide to break the couple up. Their many attempts fail, though, and Darren and Judith soon announce their engagement. Taking more drastic measures, Wayne and J.D. kidnap their friends bride-to-be and attempt to rekindle the romance between Darren and his high school girlfriend, Sandy. Will their plan work or will their best friend marry Mrs. Wrong?

Saving Silverman DVD/Blu-ray is rated PG-13. Parents are urged to be cautious. Some material may be inappropriate for pre-teenagers (under 13).

The movie currently has a 5.7 out of 10 IMDb rating and 22 Metascore on Metacritic. We will continue to add and update review scores.