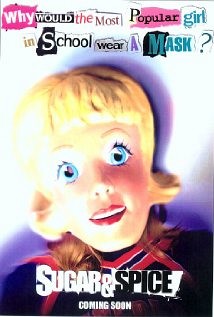 DVD: Sugar & Spice DVD release date is set for July 17, 2001. Dates do change so check back often as the release approaches.

Blu-ray: Sugar & Spice Blu-ray will be available the same day as the DVD. Blu-ray and DVD releases are typically released around 12-16 weeks after the theatrical premiere.

Digital: Sugar & Spice digital release from Amazon Video and iTunes will be available 1-2 weeks before the Blu-ray, DVD, and 4K releases. The estimate release date is July 2001. We will update this page with more details as they become available. The movie has been out for around since its theatrical release.

Jack is the star quarterback of his high school football team, and his girlfriend is Diane, the captain of the cheerleaders. They are madly in love with each other, and their passion simply cannot wait, so Diane finds herself pregnant. Both of them face the wrath of their parents, who throw them out of the house. They are forced to move into an apartment together, trying to make ends meet on Jack’s wages working at a video store. When it becomes clear that they simply do not have enough money to go around, Diane concocts a scheme. She asks her cheerleaders for their help in robbing a bank, a task they’ll accomplish with help from a hood whose homely daughter wants to be a cheerleader.

Sugar & Spice DVD/Blu-ray is rated PG-13. Parents are urged to be cautious. Some material may be inappropriate for pre-teenagers (under 13).

The movie currently has a 5.2 out of 10 IMDb rating and 48 Metascore on Metacritic. We will continue to add and update review scores.