DVD Release Dates Uncategorized The End of the Affair 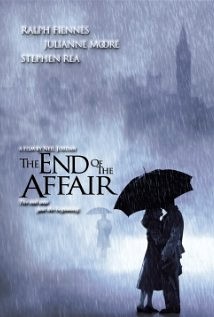 DVD: The End of the Affair DVD release date is set for May 16, 2000. Dates do change so check back often as the release approaches.

Blu-ray: The End of the Affair Blu-ray will be available the same day as the DVD. Blu-ray and DVD releases are typically released around 12-16 weeks after the theatrical premiere.

Digital: The End of the Affair digital release from Amazon Video and iTunes will be available 1-2 weeks before the Blu-ray, DVD, and 4K releases. The estimate release date is May 2000. We will update this page with more details as they become available. The movie has been out for around since its theatrical release.

The End of the Affair stars Ralph Fiennes, Stephen Rea, Julianne Moore, Heather-Jay Jones, James Bolam. View everything you need to know about the movie below.

In the halcyon days before World War II, novelist Maurice Bendrix finds himself falling head over heels for Sarah Miles, the wife of Henry Miles, his best friend. When Sarah breaks things off, Maurice is left to wonder why until shortly after the war, when he discover’s Sarah’s diary. His anguish rises with the discovery that, in fear for his life, Sarah had broken things off in a plea to God for Maurice’s survival. In an attempt to rekindle the flame, Maurice gets close to Sarah, but finds his former lover reluctant to return to the past. Directed by Neil Jordan, the film is based on a novel of the same name by Graham Greene, known best for his twisty novels of wartime espionage.

The End of the Affair DVD/Blu-ray is rated R. R stands for ‘Restricted’, which means children under 17 require accompanying parent or adult guardian. The movie contains some adult material and parents are urged to learn more about the movie.