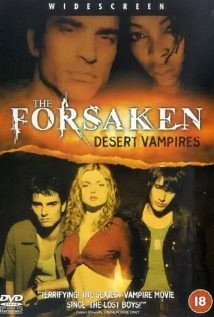 DVD: The Forsaken DVD release date is set for September 25, 2001. Dates do change so check back often as the release approaches.

Blu-ray: The Forsaken Blu-ray will be available the same day as the DVD. Blu-ray and DVD releases are typically released around 12-16 weeks after the theatrical premiere.

Digital: The Forsaken digital release from Amazon Video and iTunes will be available 1-2 weeks before the Blu-ray, DVD, and 4K releases. The estimate release date is September 2001. We will update this page with more details as they become available. The movie has been out for around since its theatrical release.

The Forsaken stars Kerr Smith, Brendan Fehr, Izabella Miko, Johnathon Schaech, Phina Oruche. View everything you need to know about the movie below.

Sean is a young man driving on a lonely road when he decides to pick up a hitchhiker. The hitcher just happens to be a vampire hunter. He is on the trail of group of extremely powerful vampires who were once French Knights from the days The Crusades. The vampire hunter is himself bitten, but a special drug prevents him from becoming a vampire. The drugs potency is time limited, however. That means he must kill the vampire who bit him before its too late. Sean becomes reluctantly embroiled in a frightening, violent, shocking and bloody vampire extermination effort.

The Forsaken DVD/Blu-ray is rated R. R stands for ‘Restricted’, which means children under 17 require accompanying parent or adult guardian. The movie contains some adult material and parents are urged to learn more about the movie.

The movie currently has a 5.1 out of 10 IMDb rating and 35 Metascore on Metacritic. We will continue to add and update review scores.