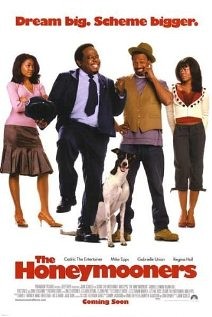 DVD: The Honeymooners DVD release date is set for November 22, 2005. Dates do change so check back often as the release approaches.

Blu-ray: The Honeymooners Blu-ray will be available the same day as the DVD. Blu-ray and DVD releases are typically released around 12-16 weeks after the theatrical premiere.

Digital: The Honeymooners digital release from Amazon Video and iTunes will be available 1-2 weeks before the Blu-ray, DVD, and 4K releases. The estimate release date is November 2005. We will update this page with more details as they become available. The movie has been out for around since its theatrical release.

The Honeymooners stars Cedric the Entertainer, Mike Epps, Gabrielle Union, Regina Hall, Eric Stoltz. View everything you need to know about the movie below.

Ralph might drive a bus around New York City, but any day now he just knows he will strike it rich. In fact, that’s how life with Ralph always goes as his wife Alice and best friend Ed already know. Ralph’s had plenty of dreams and plenty of schemes, but none of them ever turned out quite the way Ralph expected. Ralph, Alice, Ed, and Ed’s wife Trixie almost have enough money saved up to buy that Brooklyn duplex they want. At least, that’s until Ralph comes up with another scheme and ends up losing all of their savings. Ralph always has a scheme to get rich, but now he needs to come up with one to try and save his marriage.

The movie currently has a 2.8 out of 10 IMDb rating and 31 Metascore on Metacritic. We will continue to add and update review scores.