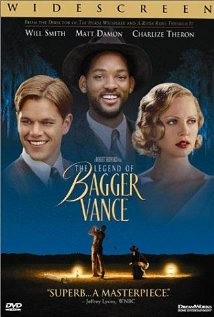 DVD: The Legend of Bagger Vance DVD release date is set for April 3, 2001. Dates do change so check back often as the release approaches.

Blu-ray: The Legend of Bagger Vance Blu-ray will be available the same day as the DVD. Blu-ray and DVD releases are typically released around 12-16 weeks after the theatrical premiere.

Digital: The Legend of Bagger Vance digital release from Amazon Video and iTunes will be available 1-2 weeks before the Blu-ray, DVD, and 4K releases. The estimate release date is March 2001. We will update this page with more details as they become available. The movie has been out for around since its theatrical release.

The Legend of Bagger Vance stars Will Smith, Matt Damon, Charlize Theron, Bruce McGill, Joel Gretsch. View everything you need to know about the movie below.

Captain Rannulph Junah is a man who has returned from battle weary with the world and unsure of his place in it. Adjusting to civilian life after the horrors of war is difficult, but his family just wants him to relax and have a little well-earned fun. Reluctantly, he agrees to take up the game of golf, to which he is hopelessly unsuited. Although it seems golf is just not his game, a mysterious caddy by the name of Bagger Vance turns up to give him some much-needed advice on how to thrive on the golf course. While his tips are helpful, the captain soon comes to realize that the advice he is giving is really intended to help him move on with his life.

The Legend of Bagger Vance DVD/Blu-ray is rated PG-13. Parents are urged to be cautious. Some material may be inappropriate for pre-teenagers (under 13).