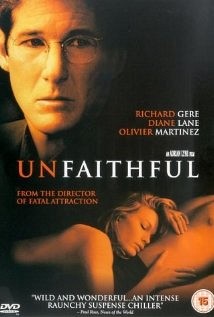 DVD: Unfaithful DVD release date is set for December 17, 2002. Dates do change so check back often as the release approaches.

Blu-ray: Unfaithful Blu-ray will be available the same day as the DVD. Blu-ray and DVD releases are typically released around 12-16 weeks after the theatrical premiere.

Digital: Unfaithful digital release from Amazon Video and iTunes will be available 1-2 weeks before the Blu-ray, DVD, and 4K releases. The estimate release date is December 2002. We will update this page with more details as they become available. The movie has been out for around since its theatrical release.

Ed and Connie Sumner seem to have a wonderful life in the suburbs. Ed is a successful business man and Connie does charitable work that takes her into the city on occasion. On one such trip she meets Paul Martel, and they soon start having an affair. Ed becomes suspicious when their relationship becomes strained and a former employee tells him that things aren’t what they seem. Hiring a private investigator,he discovers his wife’s secret. He goes to confront Paul and ends up killing him and dumping his body in a landfill. When police start coming around asking the couple questions, they admit everything to each other. Keeping their secrets, they continue their life together in the suburbs.

Unfaithful DVD/Blu-ray is rated R. R stands for ‘Restricted’, which means children under 17 require accompanying parent or adult guardian. The movie contains some adult material and parents are urged to learn more about the movie.

The movie currently has a 6.6 out of 10 IMDb rating and 63 Metascore on Metacritic. We will continue to add and update review scores.