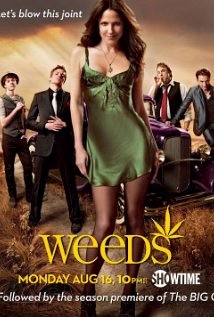 DVD: Weeds DVD release date is set for February 12, 2013. Dates do change so check back often as the release approaches.

Blu-ray: Weeds Blu-ray will be available the same day as the DVD. Blu-ray and DVD releases are typically released around 12-16 weeks after the theatrical premiere.

Digital: Weeds digital release from Amazon Video and iTunes will be available 1-2 weeks before the Blu-ray, DVD, and 4K releases. The estimate release date is February 2013. We will update this page with more details as they become available. The movie has been out for around since its theatrical release.

Weeds stars Mary-Louise ParkerHunter ParrishAlexander Gould. View everything you need to know about the movie below.

Weeds is a comedic drama series that tells the story of Nancy Botwin, a housewife from a typical suburban community and her descent into a life of crime. After Nancy’s husband dies, she sets out to become the friendly neighborhood marijuana dealer. Nancy assumes it will be easy to sell weed to her neighbors, but business proves to be a little more challenging than she could possibly imagine. Throughout the series, she runs into a host of obstacles, the biggest ultimately being herself.

Weeds DVD/Blu-ray is rated TV-MA. This program is specifically designed to be viewed by adults and therefore may be unsuitable for children under 17. This program may contain one or more of the following: crude indecent language (L), explicit sexual activity (S), or graphic violence (V).