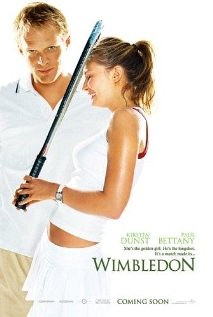 DVD: Wimbledon DVD release date is set for February 27, 2007. Dates do change so check back often as the release approaches.

Blu-ray: Wimbledon Blu-ray will be available the same day as the DVD. Blu-ray and DVD releases are typically released around 12-16 weeks after the theatrical premiere.

Digital: Wimbledon digital release from Amazon Video and iTunes will be available 1-2 weeks before the Blu-ray, DVD, and 4K releases. The estimate release date is February 2007. We will update this page with more details as they become available. The movie has been out for around since its theatrical release.

As Wimbledon approaches, aging tennis pro Peter Colt decides to announce his retirement when the tournament is over. Fate intervenes when he meets hot new tennis phenomenon Lizzie Bradbury. Dedicated and ambitious, Lizzie helps revitalize Peter’s sagging career, and he begins believing he has a chance at the championship. Meanwhile, Lizzie’s controlling father disapproves of their relationship, complaining that Peter is ruining Lizzie’s game. As the two advance to the semi-finals, they must choose between their growing relationship and their tennis careers.

Wimbledon DVD/Blu-ray is rated PG-13. Parents are urged to be cautious. Some material may be inappropriate for pre-teenagers (under 13).

The movie currently has a 6.3 out of 10 IMDb rating and 59 Metascore on Metacritic. We will continue to add and update review scores.