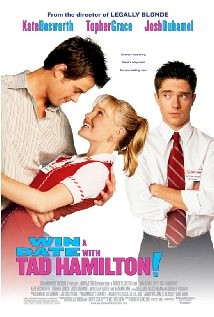 DVD: Win a Date with Tad Hamilton! DVD release date is set for April 20, 2004. Dates do change so check back often as the release approaches.

Blu-ray: Win a Date with Tad Hamilton! Blu-ray will be available the same day as the DVD. Blu-ray and DVD releases are typically released around 12-16 weeks after the theatrical premiere.

Digital: Win a Date with Tad Hamilton! digital release from Amazon Video and iTunes will be available 1-2 weeks before the Blu-ray, DVD, and 4K releases. The estimate release date is April 2004. We will update this page with more details as they become available. The movie has been out for around since its theatrical release.

Supermarket cashier Rosalee is a small-town girl who dreams of someday meeting her favorite movie star, Tad Hamilton. Rosalee’s dreams become a reality when she wins a contest and gets the grand prize: a date with the hunky actor. Rosalee’s co-worker and long-time best friend, Pete, is secretly in love with the sweet girl from West Virginia, so he is quite displeased to learn that the date went well and that Rosalee and Tad are smitten with each other. Also unhappy with the situation are Tad’s manager and agent, who orchestrated the contest as a way to repair Tad’s party boy image. After meeting Rosalee and getting a sense of the small-town lifestyle, Tad yearns to live a simpler life and moves to West Virginia.

Win a Date with Tad Hamilton! DVD/Blu-ray is rated PG-13. Parents are urged to be cautious. Some material may be inappropriate for pre-teenagers (under 13).

The movie currently has a 5.6 out of 10 IMDb rating and 52 Metascore on Metacritic. We will continue to add and update review scores.